On November 25th, 2020, two males attempted to gain entry into a car wash coin machine on London Road in Sarnia. They tried to cut open the coin box by using a portable oxy acetylene cutting torch but were unsuccessful.

One suspect wore beige overalls with a black sweater or coat underneath.  He had a grey hood and he held up a large blue blanket to give cover to the 2nd suspect who did the cutting with the torch.  This 2nd suspect was dressed in all black clothing including a hooded coat.

Later the same night, suspects used a cutting torch to attempt to break into an ATM machine at a banking vestibule on Confederation St.  They were unsuccessful in this attempt as well.

These attempted thefts are believed to involve a black Chevrolet pickup truck that was stolen a couple of nights earlier.

Check out the video surveillance footage at https://youtu.be/pWXari-GKnc

If you have any information that may assist the police in these investigations, call Crime Stoppers at 1-800-222-TIPS(8477)

You could earn a cash reward.  All calls are anonymous and you’ll never have to go to court.  Make the call and make some money!

A1 Security Crime of the Week – House Fires in Sarnia

The Sarnia Police Service and the Ontario Fire Marshal’s Office are investigating a series of house fires over a two night period earlier this week.

Early Monday morning (November 2nd) firefighters responded to a townhouse on fire in the 400 block of Kathleen Ave at about 2:30 AM. Shortly after that, at about 4:30 AM another home was reported on fire in the 600 block of Rayburne Ave – less than 2km north of the first fire.

The Rayburne Ave fire completely destroyed the home and caused significant damage to adjacent properties. Nobody was injured in either incident.

The very next night – in the early morning hours of November 3rd, firefighters responded to active structure fires in the townhouses on Lanark Cres in Sarnia. Two units suffered extensive damage and adjacent units were also damaged by the fire. No one was injured in either of these fires.

House fires always have the potential to endanger the lives of the occupants, their neighbours and of course the fire fighters involved in responding to and suppressing the fire.

If you have any information that may assist the investigation, please contact Crime Stoppers at 1-800-222-TIPS (8477) or submit your tip online at www.p3tips.com

Sarnia Lambton Crime Stoppers together with Allstate Insurance is proud to support the Sarnia Police Service ‘Security Camera Registry’
More and more people have security cameras in their homes these days. Footage from these videos can help the police in many different investigations.
Soooo, if you live in Sarnia, AND one or more of your cameras face the street or the front of your house (doorbell cam?) AND if you want to help solve crime in your neighbourhood, then check out the FAQ’s on the Sarnia Police Website…. https://www.sarniapolice.com/camera-registry/
Sign up today and help the police to help you !! 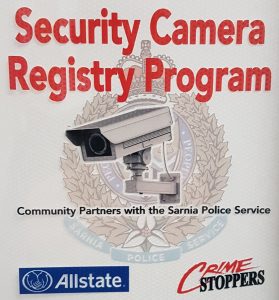 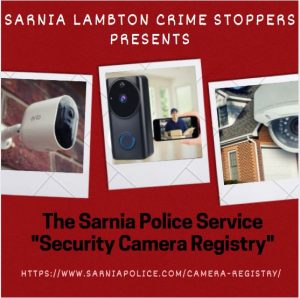