On October 17 th , 2021 shortly after 11pm, a pipe was thrown from the Murphy Rd overpass onto
Highway 402 at a moving vehicle striking the front windshield.  Moments before this, the driver saw
someone place an object on the highway, forcing a lane change just before impact. Right after the
impact, 3 people were seen on the overpass above.

A couple of hours later, a truck driver had to swerve to avoid hitting a shopping cart in the same
eastbound lanes near the same Murphy Rd overpass.
Luckily, there were no injuries in these incidents but there was a potential for very serious if not life
threatening results.
A person was arrested and charged with a similar act 2 or 3 weeks later when a bicycle wheel was
thrown from an overpass onto Hwy 402.
If you know anything about who may be responsible for throwing any objects onto a roadway from an
overpass, call Crime Stoppers at 1-800-222-8477(TIPS) and you could earn a reward up to $2,000.00

Impaired Driving Statistics on the Rise

Sarnia Police along with the Ontario Provincial Police are seeing an increase in the number of impaired drivers in and around Sarnia Lambton. This is both shameful and frightening for all of our communities.

Recently, volunteers and MADD Sarnia-Lambton Board members gathered and placed more than 200 white crosses adorned with red ribbons in front of the East Street Fire Hall in Sarnia. The display represents the many lives that are lost each year across our nation due to impaired driving during the holiday season.

To date, Sarnia Police have laid 79 charges related to impaired driving. A total of 76 charges were laid in all of 2020. In the middle of the summer of 2021, the Ontario Provincial Police reported that they had already laid 35 alcohol driving related charges. 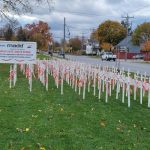 The Sarnia Police Service totals are a combination of impaired by alcohol and by drugs. The combination of drugs and alcohol or the combination of drugs and prescription drugs (known as “poly-drug” use) continues to be an issue of concern. Trained drug recognition experts throughout the province have led to the ability to spot indicators more clearly on “impaired by drug” occurrences. Given the severity of impaired driving, officers have also been more vigilant in spotting impaired drivers and removing them from our roads.

As a reminder, for the purpose of checking sobriety, police officers have the authority to conduct “mandatory alcohol screening” on ANY driver on ANY road at ANY time, after making a lawful stop.

Refusing to provide a breath sample charges have also doubled for the Sarnia Police this year. This can result in fine of $2,000.

Party hosts and bars/restaurants can be held liable and responsible for impaired drivers who leave their homes and establishments.

Roadside sobriety checkpoints and the holiday RIDE programs will be out and about in Sarnia-Lambton very soon.

If you spot someone or suspect someone to be driving while under the influence, please call 911. Get as much information as possible and police will respond to the location. Do not inform police via social media platforms. This is a “crime in progress” and needs to be dealt with immediately. Do not attempt to stop the vehicle yourself. Your safety is very important.

On Tuesday, August 31, 2021 around 3:40 AM, two males entered a business in Grand Bend.  One of the males distracted the employee while the second male put items in a bag.  Both culprits fled the scene.   An employee was assaulted during this incident.  The suspects were last observed leaving the area in a vehicle which drove away northbound on Ontario Street.

The business was smart and had a surveillance system.  These robbers were captured on that system and are pictured below.  The unique tattoo on male suspect number 1’s neck will hopefully help to identify him along with the scar on male suspect #2’s upper left chest.  Do these look familiar to you at all?  Someone out there knows who these thugs are.

A1 Security Crime of the Week – Stolen Motorcycle from Grand Bend

On October 26, 2021, a lone male was observed in Grand Bend as he stole a red Honda Crom motorcycle.

The Honda Crom is a very small, 125cc motorcycle that sits only 30” high at the seat and weighs just 225 pounds. It is a popular, street-legal, entry-level motorcycle. 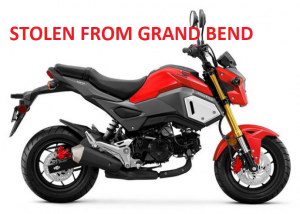 This man arrived at an address on Ontario St in Grand Bend in a two-toned silver or grey Toyota Tacoma pickup truck. He loaded the small motorcycle into the bed of the pickup truck before closing the tonneau cover and leaving northbound on Ontario Street.

The individual is described as a heavier-set male wearing a dark coloured hoodie and surgical mask.

Officers are looking to identify either of these individuals.

If you have information on this event, please call Crime Stoppers at 1-800-222-8477 (TIPS), or submit a tip online at www.sarnialambtoncrimestoppers.org where you may be eligible to receive a cash reward of up to $2,000.

To: ALL Participants, Sponsors & Volunteers
Sarnia-Lambton Crime Stoppers would like to sincerely thank you for taking part in our 34th Annual Charity Golf Tournament at Huron Oaks in September.
Together, we raised over $8,000.00 at the tournament this year!
This money goes a long way in keeping our “Cash Reward” reserves topped up. Crime Stoppers pays out thousands of dollars in reward money each year for tips that lead to arrests and to the recovery of drugs & stolen property in Sarnia and Lambton County.
We hope you had a good time and we look forward to seeing you again next year… Keep Thursday, September 8, 2022 open and follow us on Facebook, Twitter & Instagram for registration information. 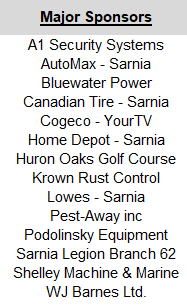 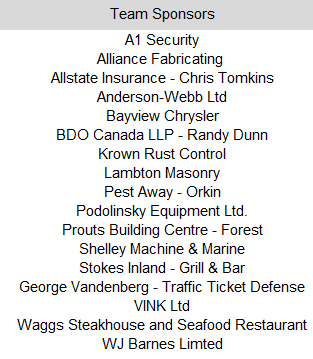 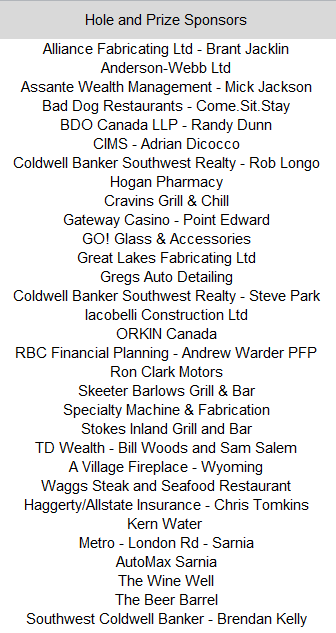 Sarnia Lambton Crime Stoppers Board of Directors and Coordinators would like to thank the following Major Sponsors for their ongoing support during these challenging times.

Although fundraising events were severely restricted or even eliminated during the Covid pandemic, these four Major Sponsors stepped up to the plate and found a way to financially support Crime Stoppers.  Clearly, they recognize the impact that Crime Stoppers has when it comes to keeping our communities safe in Sarnia and Lambton County.

We are truly appreciative!!  Thank you!!