On Saturday, July 24, 2021 at approximately 4:45 AM, there was a collision in the 800 block of Devine Street.  Sarnia Police were called to the scene where they observed a utility pole snapped in half.  Evidence and a witness at the scene indicated that after the vehicle struck the pole, it nearly missed a fire hydrant but managed to drive across the front yard of a home damaging shrubbery and a fence. It was last observed travelling from Devine onto southbound Indian Road. 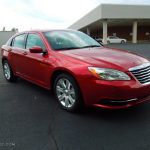 Investigators were able to follow a trail of motor vehicle debris and fluid left by the damaged automobile and located it a short time later on Norfolk Avenue.  There was no one occupying the car at the time.  It is described as a red, 2012 Chrysler 200.

Sarnia Police are looking to identify the driver of the vehicle at the time of the collision.  Crews were called out to replace the pole, the private home sustained property damage and the car is probably a “write-off”.  There is a slim chance that someone was not injured while inside this vehicle when the crash occurred.  Whiplash or cuts and bruises at minimum.

Did you hear this vehicle limping into your neighbourhood around 5AM Saturday morning?  If you have any information that could help identify the cowardly driver of this car and who is responsible for the mess and expense caused by this senseless crash, call Crime Stoppers at 1-800-222-TIPS (222-8477) or go on line at p3tips.com.  You will not have to identify yourself and you could be receive a cash reward.

Do the right thing here.  Someone knows something!