Crime Stoppers is a registered non-profit, community oriented program that relies on help from the citizens, media and our local police, in conjunction with other jurisdictions. We are governed by a volunteer civilian board with the help and guidance of our civilian coordinators.

Callers are guaranteed 100% anonymity!  We do not subscribe to caller display services, and will not accept tips through e-mail.  If your tip leads to an arrest or charges being laid, you may receive a cash award of up to $2,000.00.

For every dollar paid out in Canada, $50 in property and drugs is recovered. There are over 1100 programs in Canada, the U.S., Europe, and around the world. Crime Stoppers has been proven effective against crime, making communities safer.

Our Vision:  To be the leading nonprofit organization to promote peace and prosperity by reducing crime in Canada through cooperative efforts of police, media and the community.

Our Mission: To promote safer communities by encouraging residents to identify and report crime. 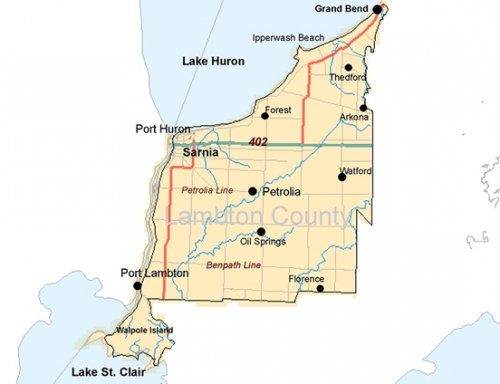 Crime Stoppers began on September 8th , 1976 in Albuquerque New Mexico, following the senseless murder of a young university student.  After 6 weeks of investigation without success, a local Canadian born detective named Greg MacAleese appealed to the public for information.  Greg and a local TV station made a re-enactment of the murder and asked for anyone with information to call him.  Greg guaranteed anonymity and offered a cash reward.  Within 3 hours of the broadcast, the detective received his first call with information.  Within 24 hours two individuals were arrested and the case was cleared!

The present coordinators are Heather Emmons and Jen Nantais.  They can be reached at contactus@sarnialambtoncrimestoppers.org

Put simply it is a three part approach to solving the crime problem.  Crime Stoppers relies on cooperation between the police, the media and the general community to provide a flow of information about crime and criminals.

The Phone Call or Online Tip

Calls are received at the local Crime Stoppers tips line phone.  This phone is a stand alone instrument which does not provide caller ID and conversations are not recorded.  Another option is to submit a tip online through www.p3tips.com and it is just as secure and anonymous as the phone line.

The Crime Stoppers civilian Coordinator receiving the information completes the tip information form, and then passes the information to the investigating officer.  Calls are accepted regarding any publicized request for information, such as “Crime of the Week” or such other crime(s) the caller has knowledge of.

By guaranteeing a caller’s anonymity, Crime Stoppers allows the caller to give information in a positive atmosphere without the prospect of retribution. By offering cash rewards for information leading to charges or arrests, the program encourages otherwise reluctant callers to provide information.

Structure and Funding of Crime Stoppers

Crime Stopper Programs are organized as a not for profit organization (Charity).  A civilian community Board of Directors provides direction as to the financial and promotional activities of the program.  The Board of Directors enhances the community involvement aspect, and its function is vital to the programs success.  Sean Robbins is currently in his 2nd term as President of the Sarnia Lambton Crime Stoppers.

The Crime Stoppers program is funded by private donations and fund raising.  The reward money paid out by the program is from the fund raising and donations from concerned citizens and businesses.  The Board of Directors, made up of persons from throughout the area, meets on a monthly basis to evaluate arrests and to decide on the size of rewards to be paid, up to $2,000. Rewards are then distributed in a private manner to the callers. Callers are eligible for rewards up to $2,000, but, despite this, many callers choose not to collect their rewards.

The answer is quite simply “yes”.  Since the start of Crime Stoppers, many calls have been received resulting in thousands of arrests and recovery of substantial amounts of property. Calls have included information about murder, robbery, sexual assault, assault, drug and firearm offences.

Crime Stoppers is definitely here to stay. It has been accepted by police as an effective investigative tool and the public, through its overwhelming response, has accepted it as a great alternative to traditional methods of providing information to the authorities.