On June 22, 2021, Sarnia Police began an investigation involving reports of stolen bicycles.  These bikes were being stored at an apartment complex located in the 200 block of Front Street in Sarnia.  The building had video security cameras and the thieves were captured on surveillance footage.

One male suspect was observed entering the parking garage area.  He was wearing beige pants, a black jacket with a hood, running shoes and a white ball cap.  This male can be seen cutting the lock off the bike and leaving the area.

A second male is observed on the surveillance camera.  This thief is wearing a ball cap and dark clothing.  He steals another bike and leaves the area.

A couple of hours later, another male is observed.  This guy is wearing dark pants, white Nike shoes and a white and black Aero hoodie.  He cut the lock on a mountain bike.  A short time later, a fourth person is seen.  This person has short dark hair, is wearing blue shorts, a white tee shirt with black sleeves and has on dark shoes.  Two bikes are removed.

Four male suspects take 5 bikes in total.    The bikes that were taken were:

A woman’s Supercycle with a front basket.  Baby blue in colour

There is no description available on the remaining two bikes.

Take a look at the photos.  Maybe you know or recognize these bold bandits.  You will remain anonymous and you could be eligible for a cash reward. 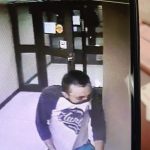 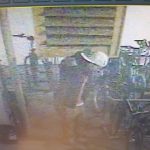 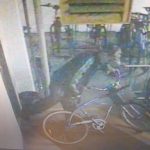 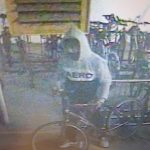 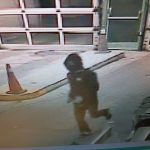